Essential Oils to be released in North America April 30! 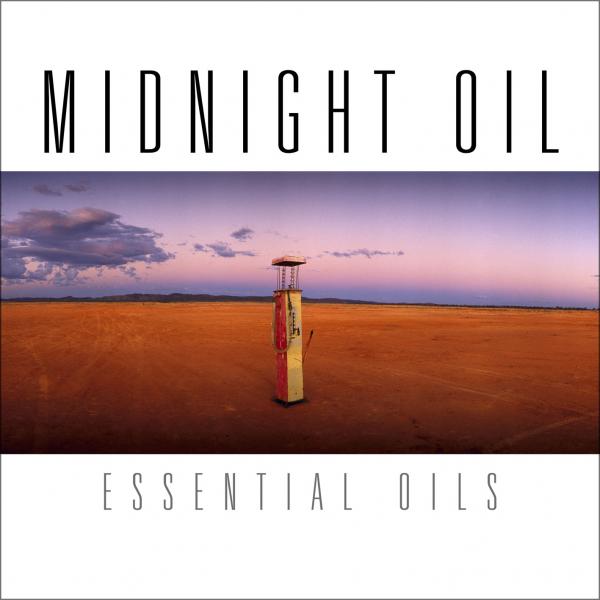 The power and the passion of one of the world’s most inspirational rock and roll bands comes across with fury on ESSENTIAL OILS, the first double-CD chronology ever assembled on Australia’s favorite sons, Midnight Oil. Containing 36 songs, handpicked by the band, the tracklist covers every one of the Oils’ 12 studio albums (and two of their rare 1980s EPs). ESSENTIAL OILS will be available everywhere April 30th through Columbia/Legacy, a division of SONY MUSIC ENTERTAINMENT.

ESSENTIAL OILS spotlights the band’s early development years (1978-1985) on the first disc before moving on to their tenure as a world-class touring and recording outfit (1987-2002) on the second disc. The songs that won them a global audience pour out like a machine gun volley to the heart: “Beds Are Burning,” “Dreamworld,” “The Dead Heart,” “Blue Sky Mine,” “Forgotten Years,” “King Of the Mountain,” “Truganini,” and more.

Midnight Oil won audiences with their fierce commitment to social, environmental, anti-nuclear, and human rights causes, especially the plight of Australia’s indigenous Aboriginal native culture. During the divisive Reagan-Bush era, a period that turned out to be as volatile and disenfranchising as the late-1960s, Midnight Oil’s conscience struck a raw nerve in America. Nearly 20 years into their career, they earned critical and commercial success in the U.S. (and UK) that would stand them in good stead for their next decade, until their official disbandment in 2002.

From 1978’s “Run By Night” (off their self-titled debut LP on the indie Powderworks label) to 2002’s “Luritja Way” (from their final album, Capricornia), ESSENTIAL OILS collects 28 Midnight Oil single sides, and eight well-chosen album and EP tracks. “For this collection,” said the band’s guitarist/keyboardist Jim Moginie, “we put our most definitive songs in chronological timeline, so listening feels like a turbo boosted journey at light speed through 25 years of being in Midnight Oil.”
“There’s many more favourites we could have included” added his fellow founding member drummer Rob Hirst, “but we had fun writing and recording all of these and loved playing them live. We also think they show the dynamics and diversity of the tracks we recorded in studios in Australia and overseas, and chart the band’s changing sounds, stories and memberships over a 25 year period.”

“In their time,” writes Rolling Stone magazine Senior Writer David Fricke in his liner notes to ESSENTIAL OILS, “on stage and record, there was nothing in rock – in Australia or anywhere else – like Midnight Oil.” Fricke cites their “14-album, 25 year campaign against glitz, injustice and complacency, corporate greed and environmental crime, by a band that had everything going against it but believed – stubbornly, rightly – that nothing would stop it.”

From 1988 to 1993, Midnight Oil placed nearly a dozen songs inside the Top 20 of Billboard’s Mainstream Rock and Modern Rock charts, starting in 1988 with “Beds Are Burning,” which has the distinction of being listed in the Rock And Roll Hall Of Fame’s 500 Songs That Shaped Rock. The success of “Beds Are Burning,” and the two singles that followed, “The Dead Heart” and “Dreamworld,” brought RIAA platinum sales (and RIAA gold in the UK) for 1988’s Diesel and Dust, the Oils’ sixth studio album, which spent over one year (55 weeks) on the Billboard 200 albums chart.

“Beds Are Burning” would go on to be listed by the Australasian Performing Right Association (APRA) in the Top 30 Best Australian songs of all time, a list that also includes “Power and the Passion.” In an APRA survey of The Top 10 Best Australian Songs Of All Time conducted in 2001, “Beds Are Burning” was ranked #3 behind the Easybeats’ “Friday On My Mind” and Daddy Cool’s “Eagle Rock.” Midnight Oil has won 11 ARIA (Australian Recording Industry Association) Awards and was inducted into the ARIA Hall of Fame in 2006. Most recently, Diesel and Dust was ranked #1 in the best-selling book The 100 Best Australian Albums by O’Donnell, Creswell and Mathieson (Rizzoli, 2010).

Garrett’s presence was especially riveting, “massively tall, bald singer Peter Garrett,” as www.MidnightOil.com describes him, “who was a one-man furnace, radiating passion, wit and a bit of righteous indignation, always covered in sweat and dancing like a dervish with a cramp.” Personnel changes were minimal. When ‘Bear’ retired in 1980 after the second album (Head Injuries), Peter Gifford replaced him, until he too retired in 1987 when the bass was taken up by Bones Hillman. The lineup was then intact until 2002.

It was also during 1990 (May 30th), when Midnight Oil interrupted its North American tour for a “special guerilla action” in front of the Exxon Building on crowded Sixth Avenue in midtown Manhattan. The agit prop event was a live concert from the back of a flat-bed truck that drew over 10,000 people at the high noon hour. The band was making public its feelings on the planet’s crumbling environment.

“It was always a desire of ours to be able to play a big city like New York on the streets,” lead singer Peter Garrett told a packed international press conference after the performance. “We chose the front of the Exxon Building not because we attribute any special or particular blame to that corporation, but because the spill of oil in Prince William Sound from the Exxon Valdez and the whole history of what happened since that period of time for us was a perfect image and metaphor for what’s going on around the world – in our country, in Europe, in the Third World, and here.”

The event took place during the reign of Blue Sky Mining, the follow-up to Diesel and Dust and Midnight Oil’s highest-charting U.S. album (#20). Both albums were produced by Warne Livesey, best known (at the time) for his work with The The, Deacon Blue, and fellow Aussies Icehouse. Livesey was a key element in Midnight Oil’s burgeoning international success. But Blue Sky Mining resonated around the world because it was named in honor of the blue asbestos miners in Western Australia who developed mesothelioma, lung cancer, and asbestosis, considered the single greatest industrial disaster in Australian history. In 1988, they finally won their first court battle, setting off litigation and settlements that would go on for years.

Midnight Oil fans grew accustomed to (and expected) such social activism from their band. As far back as 1982’s 10,9,8,7,6,5,4,3,2,1 (their first LP to be picked up by Columbia Records in the U.S.), they had enlisted British wunderkind producer Nick Launay (known for his work at the time with UK post-punk groups Public Image Ltd. and Gang Of Four) to develop the soundscapes that informed such reactionary songs as “US Forces” and the anti-apathy anthem “Power and the Passion.” Midnight Oil was saying they would not be boxed in by geography, precedent, corporate/government agenda, or their own or anybody else’s expectations. The album spent over 200 weeks on the chart in Australia, hitting 3-times platinum, and opening the college market in the U.S. for Midnight Oil.

Their 1983 album, Red Sails In the Sunset, was released against the backdrop of Peter Garrett making a run for the Australian Senate on a Nuclear Disarmament platform. Their 1985 EP, Species Deceases was released to mark the 40th anniversary of the Hiroshima and Nagasaki bombings that ended the Second World War.

In 1986, they recorded “The Dead Heart” for the ‘handing back’ ceremony of Uluru (then Ayers Rock) to its traditional Aboriginal owners. Midnight Oil was then invited to tour through some of the most remote communities in the Australian outback with the legendary Aboriginal group, the Warumpi Band, a tour that came to be known as the ‘Blackfella/Whitefella’ tour. Midnight Oil was exposed to the austere beauty of the desert landscape, the inspiring creativity of local indigenous people, and the deplorable conditions under which they existed. The ‘Blackfella/Whitefella’ tour profoundly moved Midnight Oil as they witnessed the great pride and resilience of the indigenous people, embracing their stories and the sounds of the desert into their music.

By the time of 1993’s Earth and Sun and Moon, Midnight Oil had succeeded in replacing the unrelenting assault of their early records with warmer acoustic textures and a more introspective, seductive sound. It provided their entry into Peter Gabriel’s WOMAD world music festival touring scene. They eagerly soaked up new influences that were revealed on their 1996 album, Breathe, recorded in Sydney and New Orleans with producer Malcolm Burn.

Redneck Wonderland followed in 1998, a radical, post-punk, anti-racist, industrial album that railed against a seething anti-migrant and anti-Aboriginal sentiment that was being inflamed for political gain in Australia. At the closing ceremonies of the 2000 Olympic Games in Sydney, Midnight Oil performed for the world with the word ‘Sorry’ emblazoned across their clothing – a reference to the apology due to stolen generations of Aboriginal children forcibly removed from their families between the 1890s and 1970s, in many cases never to see their parents again.

Midnight Oil’s final album, 2002’s Capricornia, produced by Livesey, was inspired by the themes of Xavier Herbert’s landmark first book of the same name, published in 1938, based on his experiences in the official government post of Protector Of Aborigines in Darwin. Thus, one of the fiercest and most fascinating journeys in the course of contemporary music came to its proud conclusion. Starting in 2005, Peter Garrett has held a number of significant government posts, while Hirst, Moginie, Rotsey, and Hillman have all pursued numerous music projects since 2002.

“It ended too soon for me,” Fricke’s notes sum up. “But I always keep the music close – everything here and all that’s waiting for you beyond this set, if it’s your first Oils album. The thrills, fury and defiance – that hope against all odds – never quit. ‘If the Oils should be seen in any particular bright light,’ Garrett told me in 1990, ‘they should be seen as an aberration that can work – that there’s room for the rogue angels.’”

ESSENTIAL OILS AVAILABLE ON ITUNES AROUND THE WORLD!

Fans around the world can now get the digital version of Essential Oils from iTunes. You get the full 36 track album as well as a digital booklet which is identical to the CD version and includes liner notes by Rolling Stone U.S Senior Editor David Fricke.

Click here to get it on iTunes in your country.
* U.S iTunes release details coming soon.

If you would prefer to get the CD, you can get it at the official Midnight Oil online store. or, check with your local music retailer.

We are very happy to announce that ESSENTIAL OILS is released in Australia & New Zealand today. For international fans, you can order via the official Midnight Oil store now and stay tuned for international release dates soon.

Here are a few ordering options:

JB HI-FI ONLINE
Order the 2CD set and get a bonus sticker plus go into the draw to win an ESSENTIAL OILS print signed by Peter, Rob, Jim & Martin

ITUNES AU
Get the 36 track album including a digital booklet

ITUNES NZ
Get the 36 track album including a digital booklet

Or check with your local retailer for more information.

No images found!
Try some other hashtag or username