In early 2021 Midnight Oil will perform a handful of special outdoor concerts called MAKARRATA LIVE. At each show, the band will be joined on stage by an incredible line up of First Nations collaborators for a unique concert event featuring music from their #1 mini album The Makarrata Project plus iconic Midnight Oil songs of Reconciliation from throughout their career.

These gigs will seek to elevate The Uluru Statement From The Heart which calls for a Makarrata – or “truth telling” – to account for the theft of lands and displacement of First Nations people. The shows will take place in strict accordance with each state’s Covid19 protocols. Due to the huge logistical challenges involved, these events will only be staged at one venue in SA, QLD, NSW, VIC & ACT making them each a unique live experience. The band is aware that many fans will be disappointed that the tour is visiting such a limited number of locations but Midnight Oil will tour in their own right later in 2021 by which time large indoor shows can hopefully be staged safely and without compromise throughout Australia and New Zealand at least.

MAKARRATA LIVE will be previewed at Sirromet Wines (near Brisbane) on Sunday 28 February, before its official world premiere on Monday 8 March in South Australia as part of a reimagined Womadelaide (at which the band will also perform a one-off headline performance two nights earlier). The MAKARRATA LIVE dates will then follow on at Hope Estate in the Hunter Valley on Saturday 13 March and Canberra’s Stage 88 on Wednesday 17 March before a grand finale at Geelong’s Mt Duneed Estate on Saturday 20 March. For full tour and ticketing info see below.

Midnight Oil originally planned to play some MAKARRATA LIVE concerts earlier this year including a headlining slot at Splendour In The Grass. Those plans were unfortunately delayed by Covid19 and were then thrown into doubt by the harrowing terminal illness of long-time bass player, Bones Hillman. However, Bones urged his bandmates to proceed with these live shows to help draw focus to the new recordings the group had all made together late last year. In fact, just a few hours before his tragic passing he received confirmation that The Makarrata Project had debuted at the top of the ARIA Album Charts. It was Midnight Oil’s first new music #1 since Hillman’s very first record with the band, Blue Sky Mining, way back in 1990.

“Bonesy leaves giant shoes to fill but we’ll need to find a new bass player for this tour”, said drummer Rob Hirst. “On this issue Bones was clear: ‘the show must go on!’, he said, ‘as soon as it’s safe to play gigs again’. We’re hoping that these Makarrata Live shows will increase awareness of The Uluru Statement From The Heart and further the reconciliation between First Nations and non-Indigenous Australians and we’ll also be dedicating the tour to Bones.”

For all other dates, fan pre-sale starts Monday 14 December from 11:00am local time, and ends after 24 hours or until allocation exhausted. Pre-sale information will be sent out via newsletter at 5:00pm AEDT on Sunday 13 December, sign up via bit.ly/OilsNews. General public on sale 2:00pm local time Wednesday 16 December via www.midnightoil.com/tour. 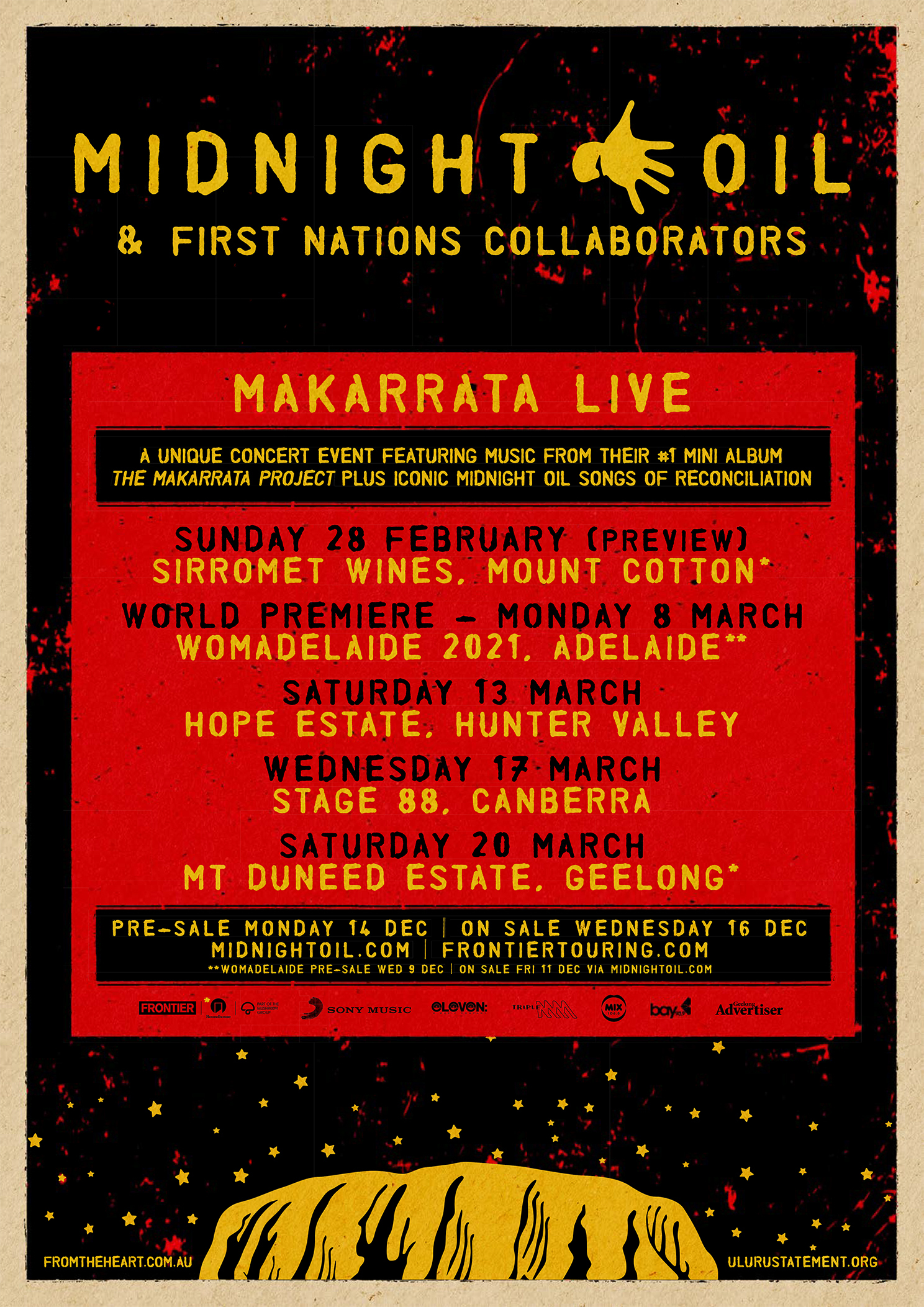