In 2017 Midnight Oil returned from a long hiatus with a sweat drenched pub gig at the legendary Sydney venue, Selina’s. In the middle of that special set, frontman Peter Garrett borrowed some famous lines, exhorting “rage, rage, against the dying of the light”. And that’s exactly what they’ve done ever since. They sold out 77 shows in 16 countries on their epic “Great Circle” tour. They toured Europe again, did a memorable gig in the outback, then returned to the studio for the first time in over 18 years and recorded 20 new songs. The first batch of that material, The Makarrata Project, debuted at #1 on the same weekend that longtime bass player Bones Hillman sadly died. Despite that profound blow, and a global pandemic, the band and their First Nations Collaborators still mounted their acclaimed “Makarrata Live” shows early this year – championing the Uluru Statement and highlighting ongoing injustices suffered by First Nations people.

Today Midnight Oil announced that this chapter of their career will come to a memorable close next year with the release of the other 12 new songs they recorded with Bones and a series of big gigs. Both are aptly titled Resist.

The band also announced that this will be their final concert tour while making it clear that this does not mean the end of the Oils. Each of the members will continue their own projects over the years ahead. They remain very open to recording new music together in future and supporting causes in which they believe but this will be their last tour.

Meanwhile Resist will be a fitting, forward looking, statement for a band whose clarion call has always been “it’s better to die on your feet than live on your knees”. The tour will see them performing classic Midnight Oil songs from across their repertoire while also showcasing some urgent new works. As the title makes abundantly clear, Resist engages with the issues of today and tomorrow – like the lead single “Rising Seas” which tackles the climate crisis in typically uncompromising fashion.

The album pre-order and Australasian tickets will go on-sale from next Tuesday 30 November. Dates, venues and all other info is listed at midnightoil.com/tour. A handful of international concerts is also being considered (subject to Covid restrictions).

Rob Hirst says: “If I look back, I see a blur of familiar names and faces: Jim, Pete, Martin, Bear and me, slamming loud prog-pop in a Chatswood garage; Giffo, magnificent, rocking back and forth at his first Royal Antler gig; Bonesy, headphones on, singing, lounging on the deck learning our catalogue.

I see our wives and trusted friends, and the tiny faces of the ‘Baby Oils’, watching us from side of stage, from Sydney to Sao Paulo to Saskatoon.

But mostly, blinded by stage lights, I see the first two rows of a thousand gigs: Midnight Oil fans, pumping, jumping, singing louder than the band.

Peter Garrett says: “We all know time refuses to stand still for anyone but after many years together the band’s spirit is deep, the music and words are strong, and our ideas and actions as bold as we can make them. We’ve reached people in ways we never could have imagined. Our desire to create and speak out is undimmed. We hope everyone who hears this album and gets to one of the shows will come away charged up about the planet’s future, saying ‘why stop now?’.  Having always tackled every tour like it’s the last – this time it actually will be.”

Jim Moginie says “We’ve played intensely physical gigs since our humble beginnings back in 1977 and we never want to take even the slightest risk of compromising that.  A lot has happened over the last five years. Much has been achieved and with the passing of Bones much has been lost, so it now feels like we’re at the end of a cycle.

These will be sad and beautiful gigs but luckily we’re still capable of blowing the roof off any stage and that’s what we intend to do. You could call this a farewell tour, but Midnight Oil will still continue in some form or other as we’re brothers, family. We stand as one, dependent on each other and grateful in all the important ways that make great bands great.”

Martin Rotsey says: “A huge thank you to all our fans around the world. We’ve shared so much together from the swelter of Sydney pubs to magical nights under starry skies. Your energy took us further than we could ever have dreamed.

To those down the front in the maelstrom, those at the back of the room singing their hearts out, and all of those onstage, backstage, and back home who helped make everything possible, we send our thanks.”

Resist will be Midnight Oil’s 15th studio release since the band exploded out of the post-punk scene back in 1978, blazing a singular trail of blistering gigs through Australia’s pubs and clubs. In the four decades since they have created an unparalleled string of classic tracks including “I Don’t Wanna Be The One”, “Power & The Passion”, “US Forces”, “Best Of Both Worlds”, “The Dead Heart”, “Blue Sky Mine”, “Forgotten Years”, “Truganini”, “Redneck Wonderland”, “Say Your Prayers” and the 2020 APRA song of the year “Gadigal Land (feat. Dan Sultan, Joel Davison, Kaleena Briggs & Bunna Lawrie)”. Their  Diesel & Dust LP topped the critics’ “100 Best Australian Albums Of All Time” and its worldwide hit “Beds Are Burning” is one of the “500 Songs That Shaped Rock’n’roll” according to the U.S. Rock’n’roll Hall Of Fame. The band’s performance of that song at the Sydney Olympics is etched in the memory of billions.

From the northern beaches of Sydney to the streets of Manhattan, they have stopped traffic, inflamed passions, inspired fans, challenged the concepts of “business as usual” and broken much new ground. Seeing Midnight Oil in full flight is to experience the kinetic power of live rock’n’roll. They leave you inspired to live life more passionately and to Resist.

Midnight Oil calls for governments to urgently take serious actions that reduce carbon pollution. This tour will embrace best practices for emission reductions and offsetting. A portion of proceeds will be set aside for organizations seeking to elevate the existential threat posed by the climate crisis.

Members of Midnight Oil’s mailing list will have exclusive first access to Australian tickets. Anyone who signs up by 5pm Monday November 29, will receive a dedicated email later that evening, containing the presale ticketing link and password which can be used to purchase up to 8 tickets per show. Presales are expected to sell out quickly so fans are strongly advised to make sure they are logged into the ticketing agency website prior to the onsale times. Members of the General Public, including anyone who missed out on the presale, will then have access to tickets from Wednesday December 1. See below for ticketing information, and visit midnightoil.com/tour for specific show dates and information.

In addition to these shows, the band has already announced special appearances in Tasmania for Mona Foma 2022 and at Byron Bay Bluesfest next Easter. Details about those festival events at monafoma.net.au and bluesfest.com.au

Don’t miss a very special Midnight Oil performance on The Sound this Sunday 28 November at 5.30pm on ABC TV or ABC iview 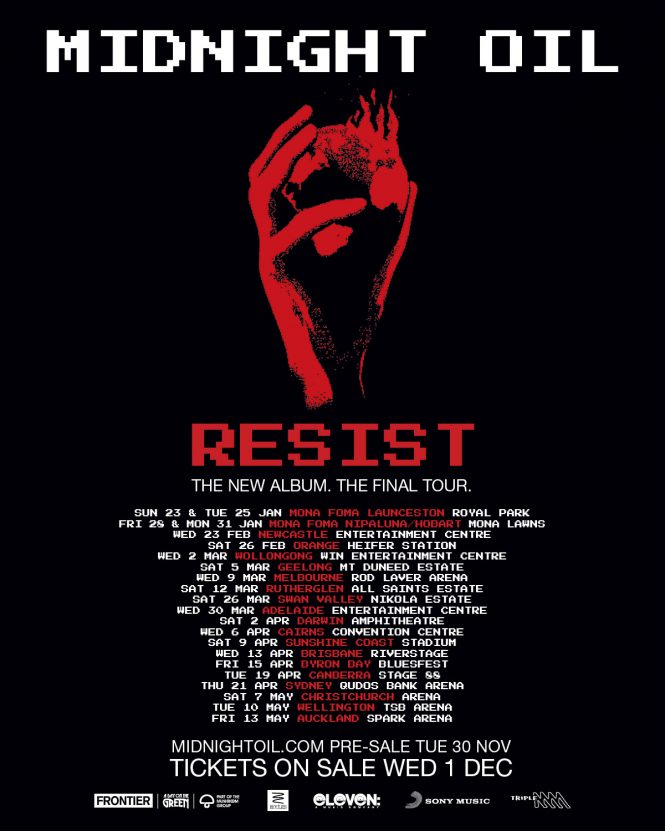 All shows are Licensed All Ages. EVERY patron must have a ticket regardless of age, and under 18 patrons must be accompanied at all times by a responsible adult with their own ticket.

IMPORTANT INFORMATION
Patrons are advised to purchase tickets only through authorised ticket sellers. We cannot guarantee any ticket purchase made through any means other than the official ticketing agents listed on midnightoil.com/tour.

or until pre-sale allocation exhausted

10am local start (everywhere except Melbourne and Canberra)

General public on sale via www.midnightoil.com/tour 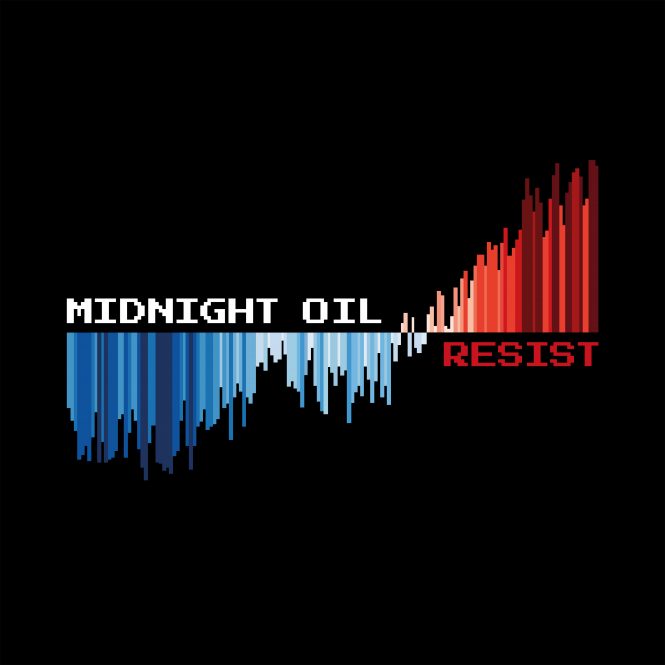 At the Time of Writing

To the Ends of the Earth

We Art Not Afraid

RESIST the new album will be available for pre order from 12:01am AEDT Tuesday November 30th.

« The Hillmans: A Tribute To Bones
RESIST THE NEW ALBUM IS NOW AVAILABLE FOR PRE-ORDER »