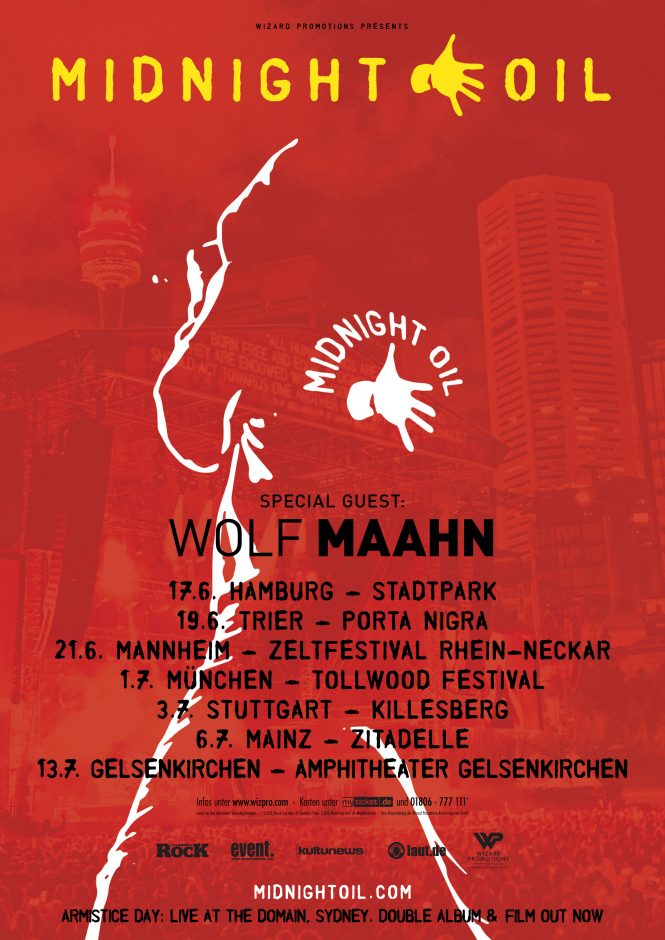 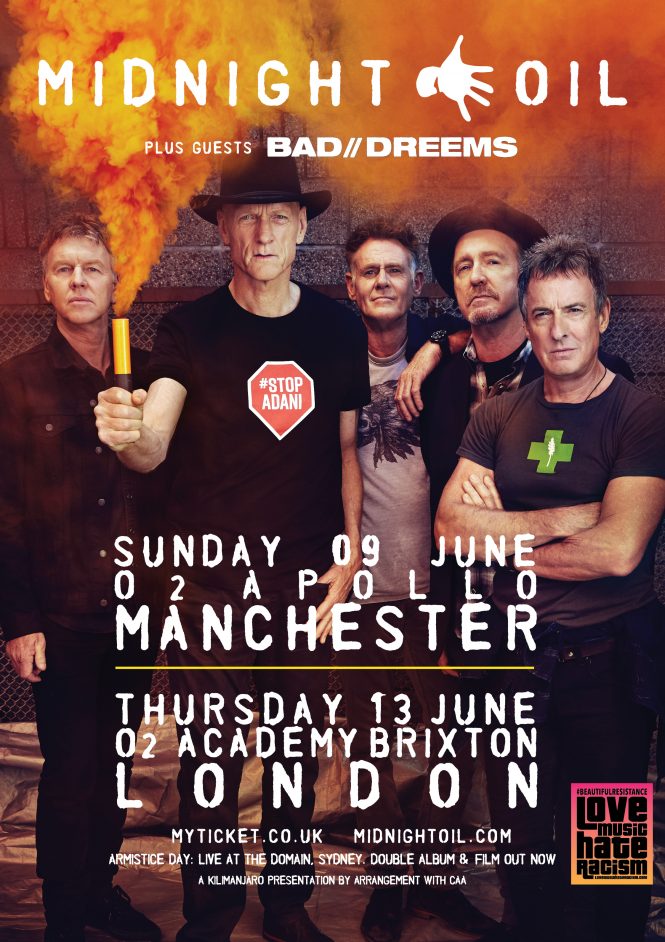 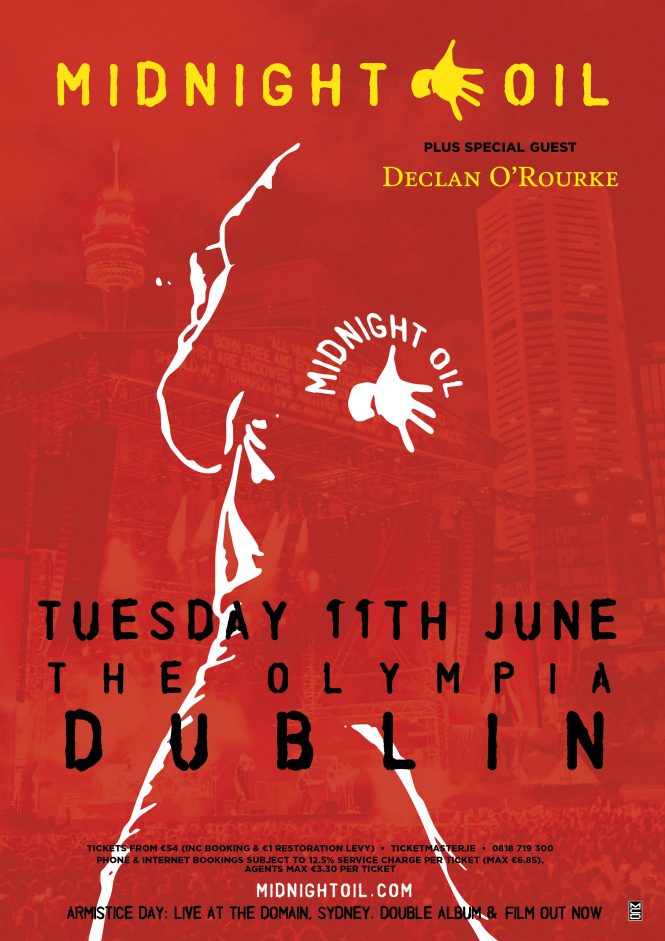 Midnight Oil today announced two intimate gigs for late May. These will be the Oils’ only Australian concerts for 2019 apart from their headlining appearance at the world’s most remote music festival, The Big Red Bash, near Birdsville on July 18.
Tickets for the two warm up shows at Anita’s Theatre in Wollongong on Thursday 23 May and Canberra’s Royal Theatre on Monday 27 May will go on sale to members of Midnight Oil’s mailing list from 2pm AEST on Tuesday 9 April. Sign up to the mailing list via bit.ly/OilsNews.
Given the unusually small size of these venues they are expected to sell out quickly. A second batch will then be available to the general public from 10am on Friday 12 April. Strict anti-scalping measures will be in place for both dates and further ticketing information is detailed below. As always, fans are strongly advised to avoid using search engines like Google to find tickets as they steer buyers to unscrupulous and expensive overseas resellers. Instead fans should avoid getting ripped off by simply clicking the links to the official ticket agencies at www.midnightoil.com/tour.*
Appropriately for a band who are longtime advocates for First Nations peoples, the Canberra show will take place on Reconciliation Day, which is a public holiday in the A.C.T.
“Meaningful steps towards reconciliation are long overdue, including a whole of government response to the Uluru Declaration, so it will be good to be in Canberra on this important date to kick up a fuss and help get the issue back on track,” said the band’s frontman, Peter Garrett.
Special guests for the Wollongong show will be local experimental pop band Shining Bird, while acclaimed Darwin singer-songwriter Leah Flanagan will open proceedings in Canberra.
Immediately following these gigs, the Oils will head to Europe for headline concerts in cities including London, Manchester, Dublin and Paris, as well as major festivals in France, Switzerland and Germany, before returning home for The Big Red Bash. Tickets for that unique music event in the QLD desert are already selling fast. Transport and camping packages are available here for anyone still considering a trip to see Midnight Oil play at sunset with a gigantic outback sand dune as their backdrop.
In other big news the Oils have also confirmed rumours that they hope to track some new music for possible release in 2020. If all goes to plan these would be their first recordings since 2001. At this stage it is not known whether a new song or two will be previewed at some point during their tour, but the band currently plans to head straight into the studio when they come off the road.
Oils drummer Rob Hirst said, “We’ve been talking about recording again for years but The Great Circle Tour in 2017 was such a positive experience that it made us even hungrier to get back to making new music together. It’s a bit early to know what might come out of it yet – we’re just looking forward to getting back into that creative mode.”
Last, but certainly not least, Midnight Oil also announced today that they will perform a couple of songs acoustically at the 1 Million Women LoveEarth Festival, which happens from 9:30am on 25 May at Carriageworks, Sydney. 1 Million Women is one of the world’s largest women’s movements acting on climate chaos. This is their big birthday bash after 10 years of action on climate change and it will be streamed online around the world. Their LoveEarth Festival is a morning of inspiration involving speeches from world leaders, women from the front lines of climate change, sustainable fashion gurus, zero wasters and musicians, including a brief but special acoustic performance by Midnight Oil. For tickets and more information please go to https://www.eventbrite.com.au/e/1-million-women-loveearth-festival-tickets-58046154611.
*Minors under 18 years must be accompanied by a parent/guardian. Under 10s not permitted. All patrons require a ticket. 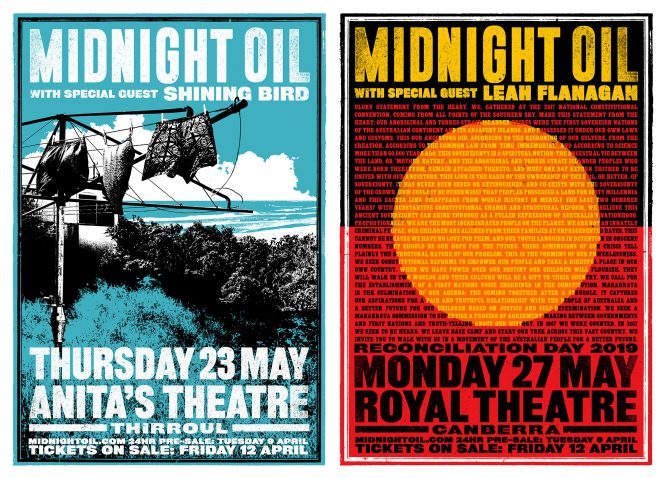 Head to wwww.midnightoil.com/tour to check out newly added tour dates for Midnight Oil in 2019!